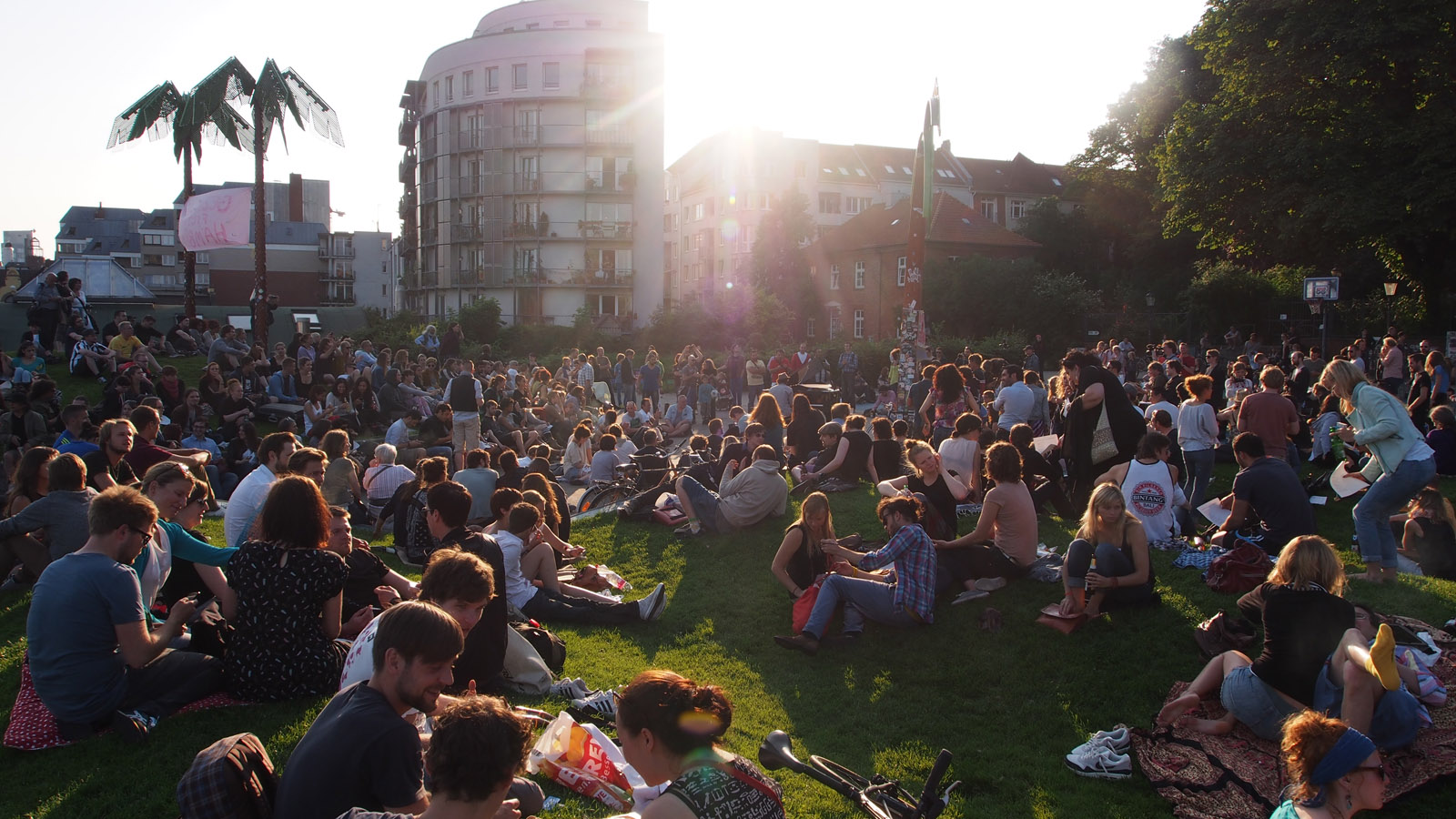 Welcome to the official site of Park Fiction: Since June 16, 2013, Park Fiction is Gezi Park Fiction St. Pauli. after the clearing of occupy gezi, the neighbours pictured below, renamed the park as a gesture of solidarity with the struggle in Istanbul & turkey.

This text is a brief introduction to Park Fiction, it’s practices, concepts, terminology – and how these (or some of these) are being actualized in the current struggles for the Right to the City in Hamburg. 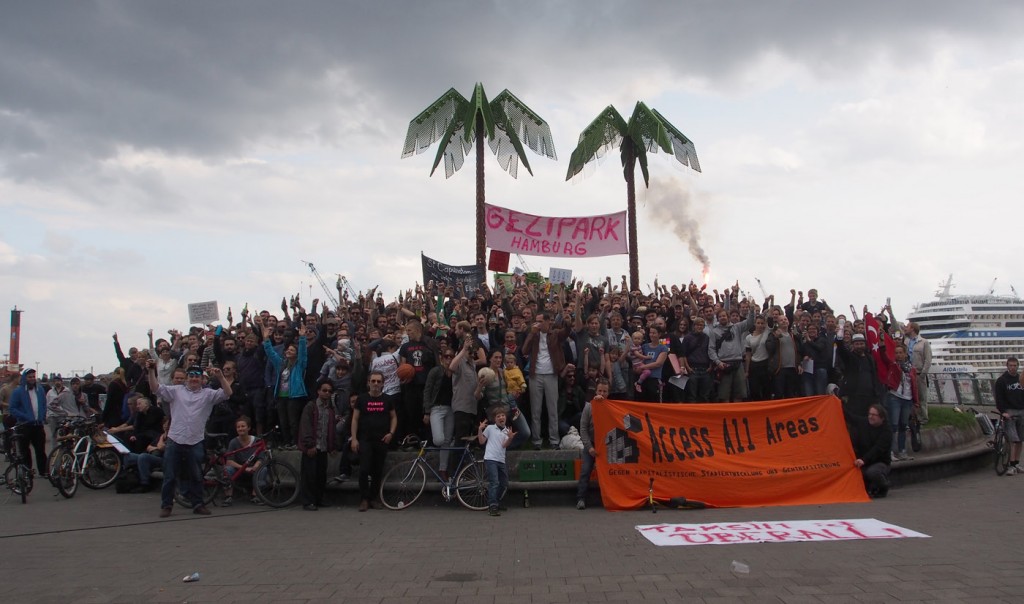 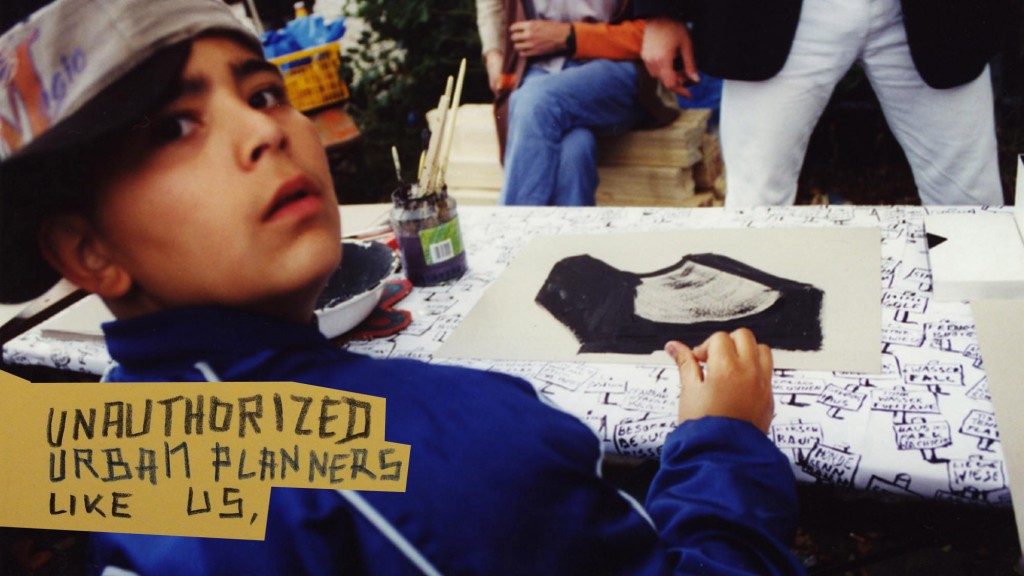 Today the neighborhood park has been realized. Designed by the residents, it is located with a view over the harbor, in a significant and beautiful place, that the city’s government wanted to sell to private investors. 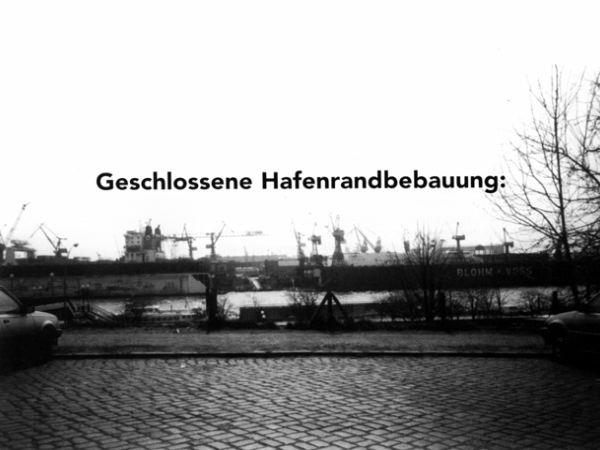 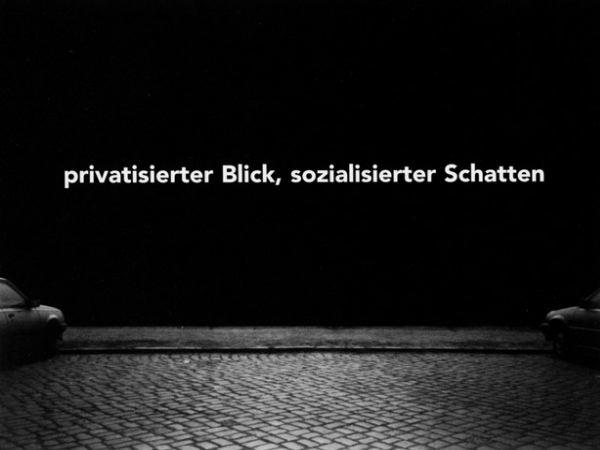 A costly building was planned here originally, but the neighborhood stopped the development in 1997. After ten years of struggles the park was inaugurated in 2005. 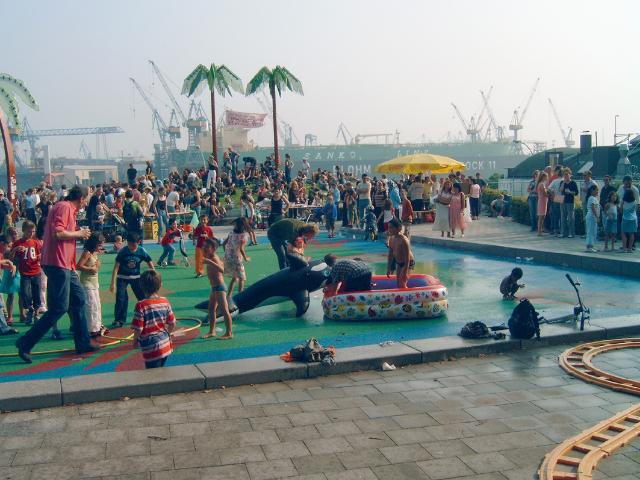 Production of Desires in the Urban Field

The plans were stopped by a clever Network in the community. Instead of just protesting against the governments plans, this network organised a Parallel Planning Process in the community, creating Platforms of Exchange between people from different cultural fields: musicians, priests, a headmistress, a cook, café owners, bar-men, a psychologist, children, squatters, artists – Interventionist Residents. 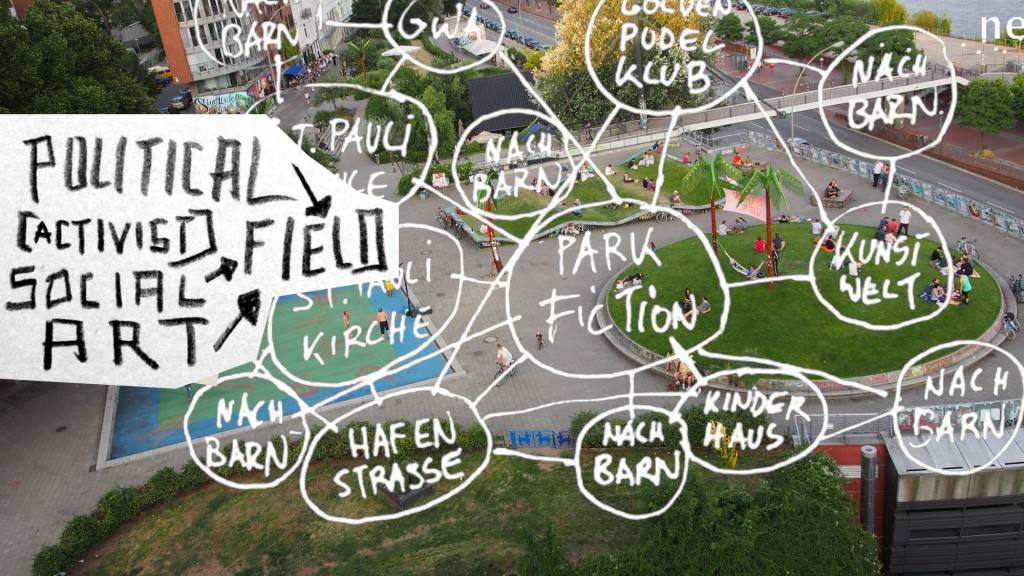 Instead of doing activism proper, Park Fiction made the struggle as well as the planning process work as a Platform of Exchange & Production. Lectures, talks, discussions, exhibitions and film-screenings employed the Local Knowledge, people started to make-each-other-more-clever. 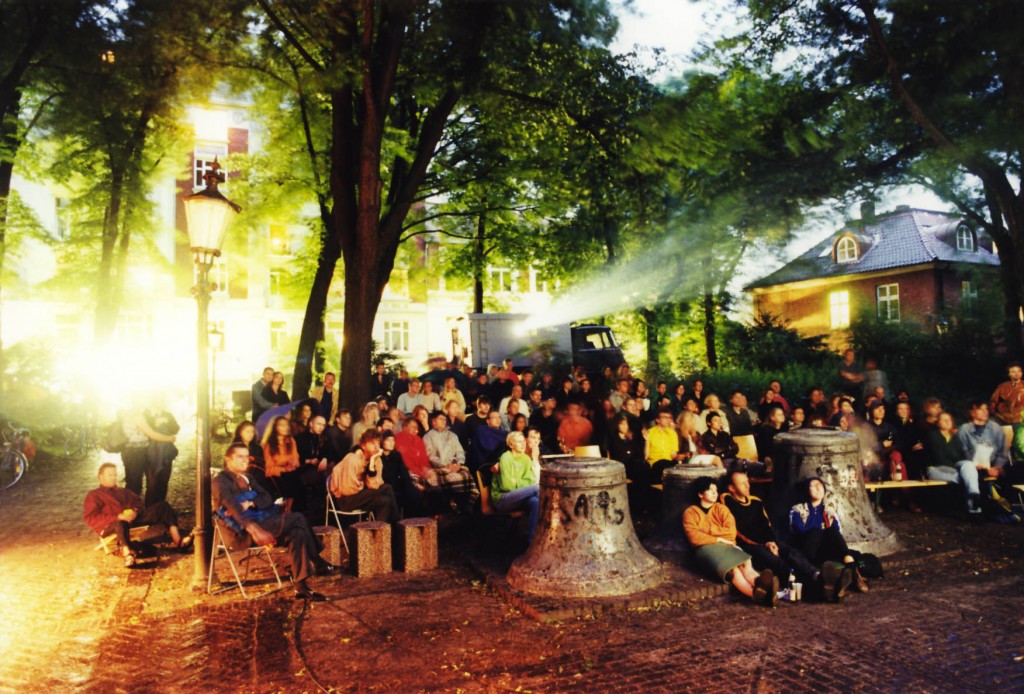 Special tools were developed to make planning more accessible: the Plasticine Office, the Archive of Desires, questionnaires and maps, the Garden Library and the Action Kit (a portable planning studio with an unfoldable panorama view of the Elbe-River, for house visits), a telephone Hotline with answering machine for people who get inspired late at night. 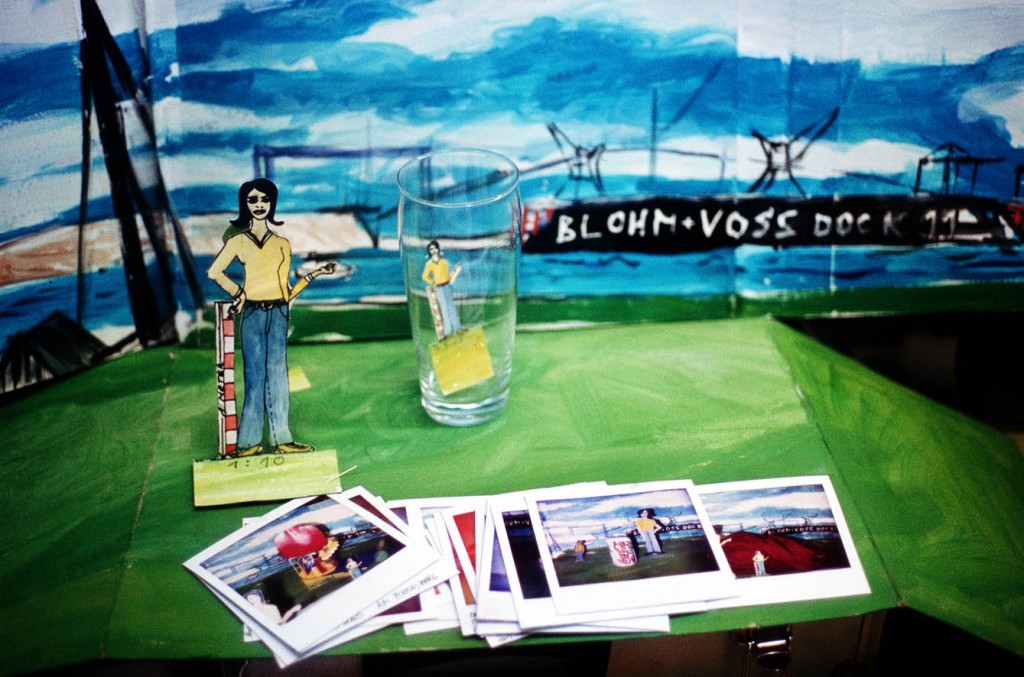 Park Fiction organised the planning process like a game. Consequently, instead of handing out textual leaflets explaining how to access the process, Park Fiction gave out a Game board showing all the possibilities to become part of the project.

Margit Czenki shot her film Park Fiction – Desire Will Leave the House and Take to the Streets on Super 8 and 16mm film in 1998, to capture the different voices and the moment, when art and politics made each other more clever. 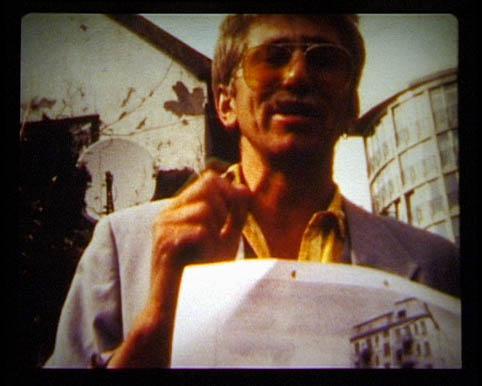 Construction of the park started years later, after Park Fiction was invited to Documenta11.

Ideas were developed into buildable designs by the residents and Park Fiction in collaboration with landscape architects. The Teagarden Island or Palm tree Island (based on a drawing by a boy called Yusuf made in 1997) features artificial palm trees (you can hang your hammock between them and enjoy the view over the harbour) and is surrounded by an elegant 40 meter long bench. 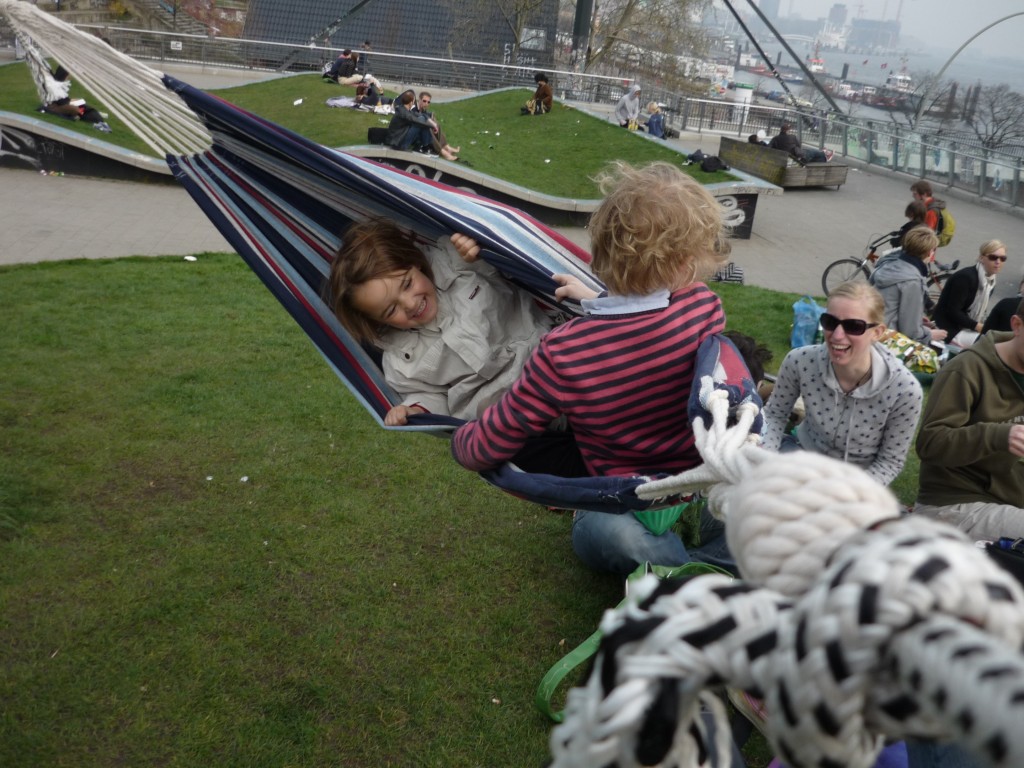 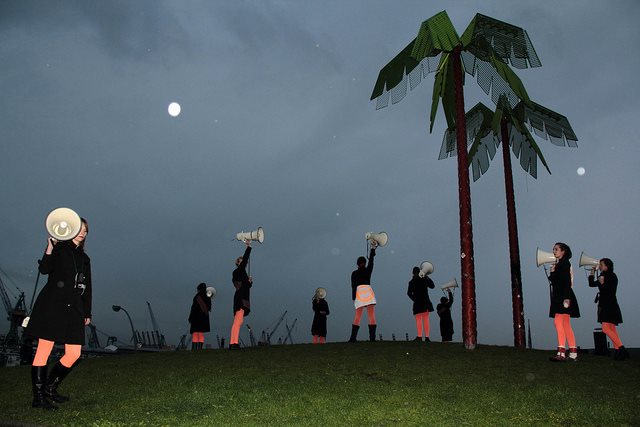 There are three Open Air Solariums and a Flying Carpet, a wave shaped piece of lawn bordered by an Alhambra-inspired mosaic, designed by Sabine Stöwesand. A flat steel palm tree is copied from the carousel on Hamburg’s funfair. 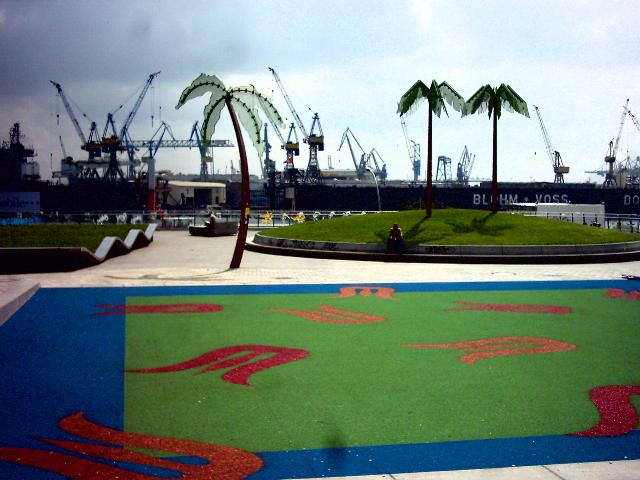 The „Bamboo Grove of the Humble Politician“ and the Dog Garden (featuring the long desired poodle-shaped-box tree) were realised in 2005 along with the Boule Field Abolition du Travail Aliené (idea by Bernd Ehemann), the tenant gardens, and the Tulip Patterned Tartan field by Nesrin Biguen. The tulip pattern is a secret reference to the tulip era in 16th century Turkey, a time cherished in collective memory for it’s flourishing of the arts, tolerance, lack of military ambition and exchange with the west.)

The Woman Pirates Fountain and the Strawberry shaped Tree house, however, have not been financed yet. This is mentioned as an example, for the damage that happens to desires, if you succeed to be In Bed wit Bureaucracy.

The plans for a Park Fiction Archive of Independent Urbanism, floating in the air in rugged El-Lissitzky-style in a container, mounted on pillars, were thwarted by local authorities. It is now housed in the new rooftop of the Golden Pudel Klub. 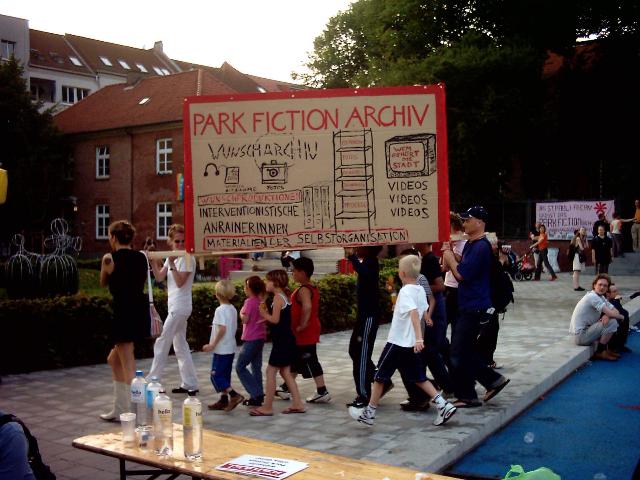 As a start, Park Fiction organized an international congress in 2003, the Unlikely Encounters in Urban Space – inviting Sarai / Cybermohalla and Raqs Media Collective’s Shuddhabrata Sengupta from Delhi, the self organized settlement Maclovio Rojas from Tijuana, Ala Plastica from La Plata, and Isola Art Center / OUT-Office for Urban Transformation from Milan, the Schwabinggrad Ballett, the Galerie für Landschaftskunst and LIGNA from Hamburg – groups that manage to create Unlikely Encounters in Urban Space. With the conference, Park Fiction also intervened into the global discourse about cities, self organisation, irregular settlements and the role of art in urban research and urban development.

The Park was inaugurated in 2005 with a Picnic Against Gentrification: 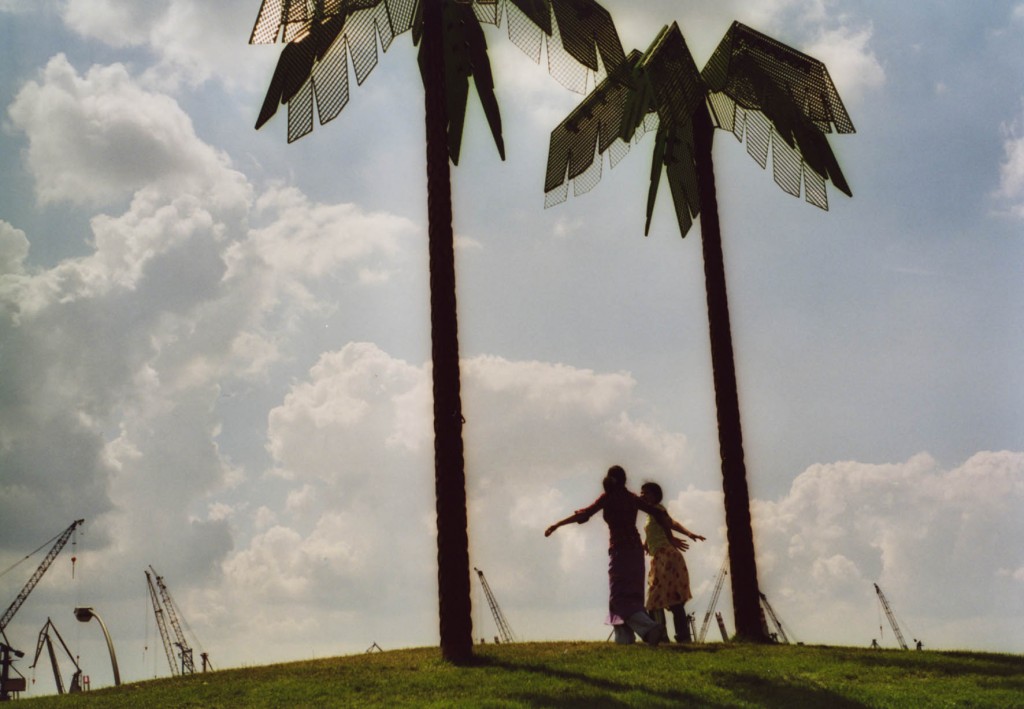 Between 2000 and 2010, rents in St.Pauli rise as dramatically as the investor’s towers. The Action-Network against Gentrification It’s Raining Caviar is formed. Caviar’s campaign starts with a party and a series of talks in the Park Fiction.

The park’s political meaning is actualized by other events: The Euromayday starts it’s annual parade in the park. On board: mobile Production of Desires against commercial beach clubs at the river. The protest is successful – the beach clubs are stopped.

Irene Budde, Olaf Sobczak and Steffen Jörg produce the documentary Empire St.Pauli – On Pearl Chains and Banning Orders. The filmmakers choose political and contested locations for their screenings. When the film is shown in Park Fiction in Summer 2009, 1300 viewers turn up. Late at night, after the screening, a spontaneous demonstration starts, protesting against gentrification of St.Pauli. The event marks one of the beginnings of the Hamburg Right to the City movement. 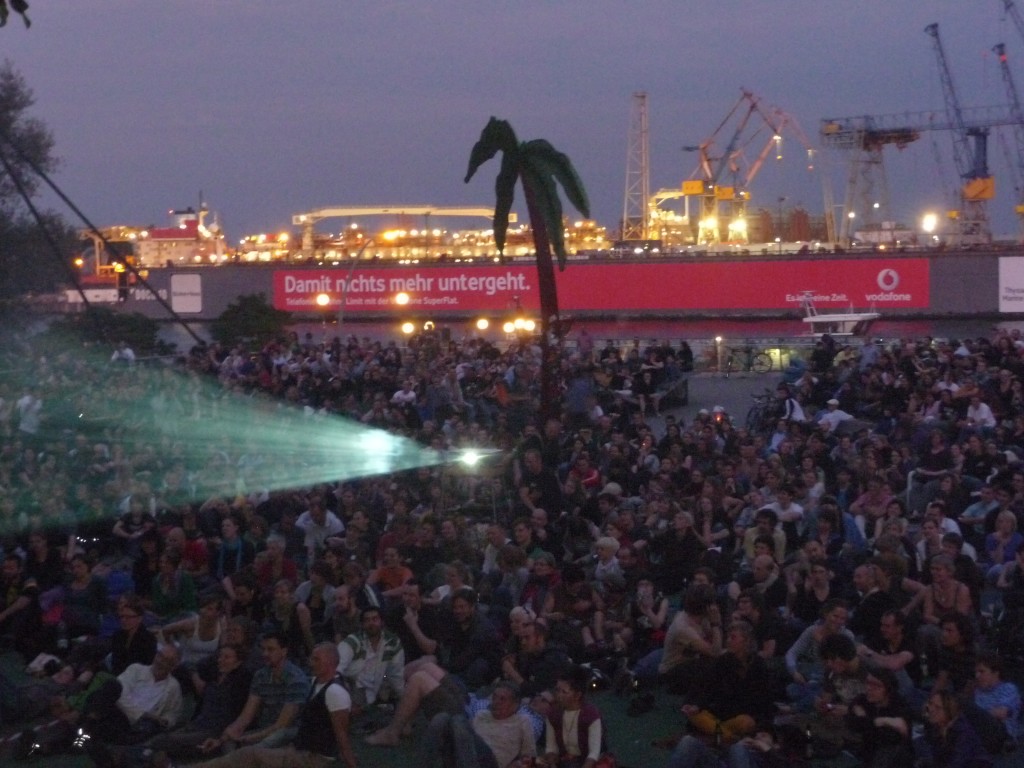 In the Video below, Park Fiction Komitee member Christoph Schäfer talks on the project and how the park has become a place of „spatialized resistance“ in the last years. „Space is the Place“ is the title of Schäfer’s Eight-Minute-Lecture in the Creative Time Summit 2013 in New York University’s Skirball Centre:

The Right to the City: Other Spatialized Struggles in Hamburg

The growing Right to the City movement relates to the urban thinking of Henri Lefebvre, whose theory influenced Park Fiction in the mid nineties. Starting in 2009, Hamburg’s Right to the City Network connects different spatial struggles (by now over 40 initiatives joined the network). It thus echoes Lefebvre’s idea, that space is produced by social interaction, movements and imagination.

Suddenly, tenants work together with artists and squatters, radical leftists with allotment gardeners, raver join forces with people fighting for sustainable energy, guerrilla gardeners cooperate with neighbours who want to set up a community run production centre with a fab lab.

Is the Hamburg Network an example, how emancipatory movements can operate outside the narrow frame of party politics? How people can get a foothold on the slippery terrain of post-fordism, by connecting spatial struggles? 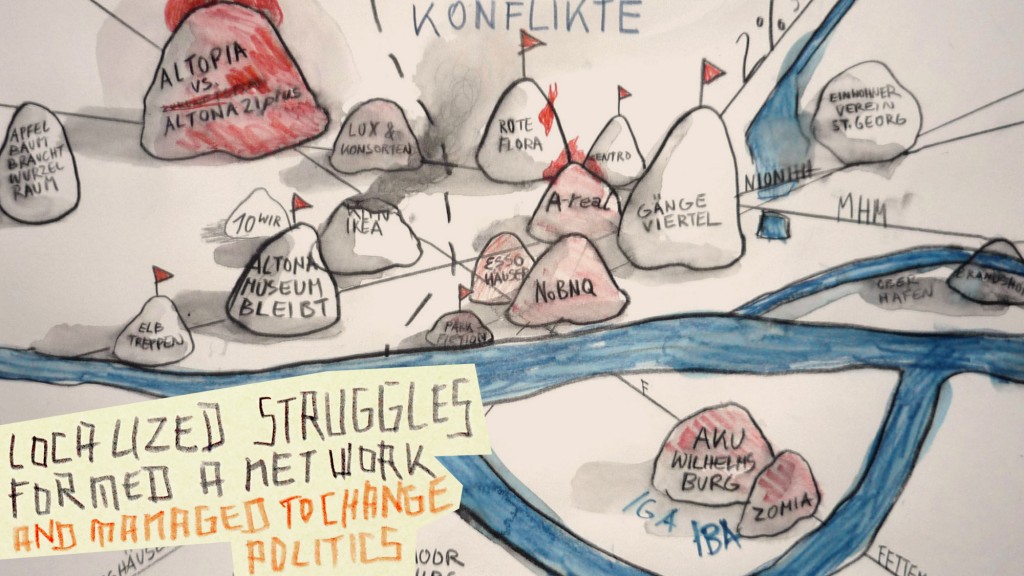 Struggles in the Hood: NoBNQ

Spring 2009, only 200 meters away from Park Fiction, new investors buy
half a block of houses. They want to kick out the old tenants,
modernise the old houses, build 82 costly condos, and then sell the
whole complex (called BNQ – Bernhard Nocht Quarter) again.

The bad news are made known, and neighbours found No BNQ.
A multitude of activities is started against the investors plans, their
advertising event is hijacked, and on a street party against the project,
neighbours start an alternative planning process.

NoBNQ develops an integrated urban concept for the houses:
cooperative housing and low rents, combined with innovative use of
the commercial spaces, with a Fab Lab, an open digital, community-
run workshop, as it’s core element. Around it, small companies like
Ameise record pressing plant, the Gyro Gearloose Playground in the
backyard or a neighbourhood Café, would provide jobs and places
of learning for local kids and grown ups.

To promote the idea, the Fab Lab Truck from the Netherlands starts
production right in front of the investor’s buildings in August 2010. The
City’s administration, however, doesn’t approve of the idea. The
neighbourhood Concept for Friendly Takeover, can not be realized.

The investors plans, on the other hand, are altered dramatically:
Because of the pressure, all tenants have a 10 year rent guarantee
(rent is frozen till 2021), instead of 82 private condos, there will be 67
tenant flats, plus 40 social flats in a cooperative house.

NoBNQ is a founding initiative of the Right to the City Network.

Disguised as a courtyard party, 200 artists squat 15 buildings in the city centre of Hamburg, the last remnants of the Gängeviertel, old working-class houses and a factory building, right between the Springer publishing house and the Unilever high rise.

2 hours later thousands of people visit the houses, watch exhibitions, discuss and party. And the wonder happens: the police stays away, and the next day, all newspapers, even the conservative ones, run double pages on the friendly artists’ squat in Hamburg.

Years before, the houses had been sold by the city to a Dutch investor years before, who planned to demolish most of the old buildings. Due to the financial crisis, the investor had difficulties to cough up the money.

Komm in die Gänge joined the Right to the City Network and launched a city-wide discussion on urban planning and politics, leading to some changes in policy and laws of the neoliberal hanseatic city.

In November 2009, 3 months later, the artists achieved the impossible: the houses were bought back by the city. And only now, in August 2011, city and squatters signed a cooperation agreement, which gives control over the houses and the renovation works to the squatters.

Production of desires – round the corner: UNSER! AREAL

…appropriates the planning process for the vacant Alte Rindermarkthalle (old cattle market) in Hamburg St. Pauli, both conceptually and physically.

Conceptually, since 2010 Unser!Areal has helped the people living nearby to express their ideas for the future of the hall in a Collective Production of Desires, inspired by Park Fiction. The desires, gathered in a first poll among 18.000 local inhabitants, are sent back into the neighbouring quarters in the form of so called „phone books“. They express a strong opposition to the initial plans of the city to streamline the hall into an entertainment centre and at the same time suggest manifold clever, socially beneficial uses.

Physically, Unser! Areal has recently entered the estate with five „planning cubes“, each seven feet wide. Unfolded the cubes open up a space for the local inhabitants in which a self-determined planning process can go on with drawing, painting and
architectural bricolage. Film screenings, discussions and practices in urban gardening accompany the process.

While the city of Hamburg has finally refrained from having the ”illegal” planning cubes removed, the struggle about the future use of the hall is in full swing as the city now plans to set it up as a mere shopping mall. 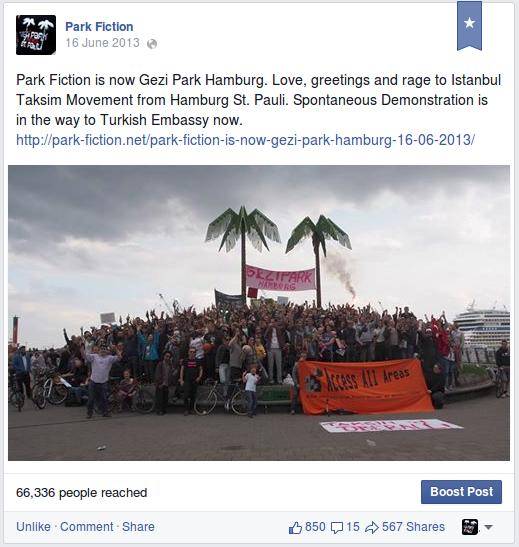 Park Fictions most popular post of all times (up till now): The solidarity shoot with occupygezi, seen by over 66.000 people on facebook alone.

Park Fiction 2 – stretching the feet into the Elbe

Since August 2020 we have started a new production of desires for the concrete strip between Elbe river and street, in front of the harbour.

„What do you think the site should be able to do in the future? How can the park’s „island principle“ jump to the Elbe? What do you need in a pandemic age?

The following restrictions are important to us: fish market and harbour birthday party should still be able to take place there. And everything that is planned must be able to withstand a flood.

Come along – we have come up with new TOOLS so that EVERYONE can plan. This first phase of the desired production starts on four weekends in August and September:

Always from 3 pm till dark

At 17.00 there is always a guided tour through the park and to the new planning area.

The planning of course with a hygiene concept.

The City is Unwritten

A nearly complete list of publications on Park Fiction starting in 1995, last updated 2006, can be found here.

All posts in English language